The Beginning
The beginnings of CHRIST AGONY date back to the first months of 1990 and until today, are inseparably connected with Cezar, the founder, the guitarist and the vocalist of the band. The 90s are the start and at the same time the quick prime for CHRIST AGONY. It led to establishing of the band in the leading edge of metal scene and earned the legions of faithful fans.
When in 1990 Bathory released “Hammerhearth”, Cezar with the first lineup of the band, i.e. Zurek (drums) and Ash (bass and vocals), worked on the material that was released as the first band’s demo, “Sacronocturn”. The second demo, “Epitaph of Christ”, released in March 1992, drew attention of Carnage Records. It resulted not only in many concerts, but above all, in the publication of full-length album “Unholyunion”, in 1993. The new way of CHRIST AGONY music led to widely understood Black Metal, and true emotions in their music quickly earned credit among fans and reviewers. “Unholyunion” was to become one of the most original and significant recording in the world of Black Metal and CHRIST AGONY themselves was to lay out the direction for that genre.
The next recordings only confirmed the craft and the status of the band on the throne of Black. In less than a year after, CHRIST AGONY recorded their second album, “Deamonseath – Act II”. Apart from signing to Polish Carnage Rec., the band signs their first contract with a foreign label, French Adipocere Rec. The album was promoted with the series of shows that attracted legions of fan.
Despite the lineup commotion the band grew in strength. The rhythm section was taken over by the members of Death Metal band Dies Irae, Mauser (bass) and Gilan (drums). In that new lineup CHRIST AGONY recorded their third album, “Moonlight – Act II”. The international label to release that album was British Cacophonous Rec., which had under their wing such bands as Bal Sagoth, Dimmu Borgir and Cradle of Filth, to name a few. It was 1996. The trilogy came to an end!

The Change
1996 was a productive year. Darkthrone released “Total Death”, Varg Vikernes was working in his prison cell, and in Poland, CHRIST AGONY were preparing to begin a new era. The time of changes was coming. The effect, “Darkside” album, was visible in 1997. It was released in Poland by Morbid Noizz and by Hammerheart abroad. And despite the fact that Cezar had entered the studio alone, during European tour, where they shared the stage together with Behemoth and Hellheim, he was accompanied by Gilan and Mauser. “Darkside”, being an experiment inspired by the works of 17th century English poets, foreshadowed changes. And the changes it brought, however paradoxically, it was the beginning of the break.

The Projects
The break in CHRIST AGONY work, which was caused by misunderstandings as to the created music, gave birth to solo projects, on which Cezar spent his all effort. While the style of MOON has its roots in the music of CHRIST AGONY, the works of WHISPERS are closer to Led Zeppelin or Black Sabbath. MOON released two official albums, “Daemon’s Heart” and “Satan’s Wept” (Pagan Records). WHISPERS’ “Passions” was released on tape by Demonic Rec.
The differences in style between the two projects were the products of one mind. Cezar gave vent to his indefatigable energy, passion and ideas that were a bit different from the music he had created before. The plans for CHRIST AGONY were becoming distant also due to the Cezar’s need of self-fulfillment in other fields. He wrote poetry, short stories, scripts and audiovisual performances that he has not staged until today. The break was also a big change for Mauser, who joined VADER.

The Comeback
CHRIST AGONY came back in November of 1997, when Cezar invited his fellow musicians to Selani Studio in Olsztyn to record material under the title of “Trilogy”. Various artists took part in the session: Blackie on bass, Gilan on drums and instrumentalist Marek Kutnik (Hermh, Prophecy, SS 2666), who programmed drums and played the keyboards. Stylistically, “Trilogy” was the continuation of the first albums, and contained remastered tracks from the cult “Epitaph of Christ” demo tape. The concert lineup: Cezar, Blackie (bass) and Gilan (drums), hit the road, this time with Lux Occulta and Hate. “Trilogy” was released by Pagan Rec.
Cezar kept on creating and exactly a year after, in November 1998, started recording of the material under the title of “Elysium”. Among the musicians invited to the studio were: Patrick Bissonette (vocals), Marek Kwadrans (bodhran), Bart (drums) and Docent (drums). The new concert drummer became Thoarinus of Sacrilegium. The album was released by Metal Mind Productions and the next set of shows followed, among others Metalmania ’99 and the excellent show at Thrash’em All Festival.
At the end of 1999 a conflict between the band and the management burst out, which resulted in CHRIST AGONY disappearing from the scene for several months, until autumn of 2000, when the musicians started their next tour in Poland together with Domain and Yattering. During one of those shows new material was recorded. It was a live album “Live- Apocalypse”, released by Apocalypse Productions as late as in 2002. The same year, remasters of the first four CHRIST AGONY albums, “Unholyunion/Daemoonseth – Act II” (Pagan Records) and “Moonlight – Act III/Darkside”(Apocalypse), were released.
Soon after that, Blackie and Thaorinus were replaced by Supreme Lord members: Reyash (bass) and Vitold (drums). However, Vitold did not stay with CHRIST AGONY for long.

UNION
In 2003 Polish metal scene grew in strength. However, for CHRIST AGONY it was the bitterest year in their history. Cezar was fighting against his left hand condition. Ulnar nerve injury had caused paralysis in the left palm, which in turn made it completely impossible for him to play the guitar. After some time he decided to be operated on and after several months of rehabilitation came back with the material that originally had been meant to be another stage in CHRIST AGONY history.
Frustration caused by those events and meaningless search for help led to signing of a contract due to which the band was forced to change the name to UNION. “Christ Agony” was the name of their album released in 2005. The line-up changed only a bit. The members of UNION were Cezar, Reyash and Mlody, Dissenter drummer.
Next abandonments by the publisher, the general state of affairs in Poland cause Cezar to take another difficult decision – he emigrated.

The Rebirth
2007 was a turning point for Cezar. After he had returned from exile, he didn’t lose time: CHRIST AGONY came back to life. At the moment, the band has finished the session for full-length album “Condemnation”. The first act of this album is “Demonology” promo. The author talks about the album with excitement: “‘Demonology’ contains 5 compositions of sophisticated, devilish taste and truly poetic warble. It’s a combination of massive and heavy sound of the guitars, distorted bass, rhythmically pulsing drums and poetry hidden in the lyrics”.
This is the way the next CHRIST AGONY act is supposed to be. The current line-up: apart from Cezar (vocals/guitar), includes Reyash (bass) and a new personality – Icanraz, drummer already well known from Abused Majesty / Devilish Impressions. That promo, released in limited edition of 666 hand-signed copies, will surely be a rarity for the band’s supporters..

NocturN
The band has finished recording their eight studio album “NocturN” in the Olsztyn based “Studio-X”. The recording session took place from March, 21 until April, 2. As previously on “Condemnation” the person in charge of the production was Szymon Czech. The graphic layout and cover art was prepared by BlackTeamMedia.
“NocturN” is a one long suite divided into 8 “heavy as hell” opuses. The session drummer for this album was Inferno – the drummer of Behemoth and Azarath.
Christ Agony has recently signed a record deal with Mystic Production, which will release the long awaited album at September, 11, 2011.
Another good news is a permanent drummer join the Christ Agony – Paul Jaroszewicz, known from Soul Snatcher, Vader… etc.
In the same time the band has played a couple of tours around Russia, Belarus and Poland with bands such as Decapitated, Vesania and Incantation, went with “NocturN European Tour 2011” in Holland, Belgium, England, Ireland and Germany, play at Swedish festival “Getaway Rock Festival 2011” with the bands likes Alice Cooper, Accept, Danzig, Monster Magnet or Kreator…

2012
The now sold out “Darkside” album was re-released by Total Metal Records (a division of Metal Scrap Records) in cooperation with A5 Production (both Ukrainian labels) at April, 29, 2012. The band is also planning to re-release the material from their both demo tapes…
At the mean time, after “Moonlight Tour 2012” in Poland, CHRIST AGONY touring under “Eastern Moonlight Tour 2012” in Slovakia, Hungary, Romania, Bulgaria, Bosnia & Herzegovina, Serbia and Croatia. After that band will go to “Nocturnal Victims Tour 2012” around Belarus, Ukraine and Moldova with Dead Infection. 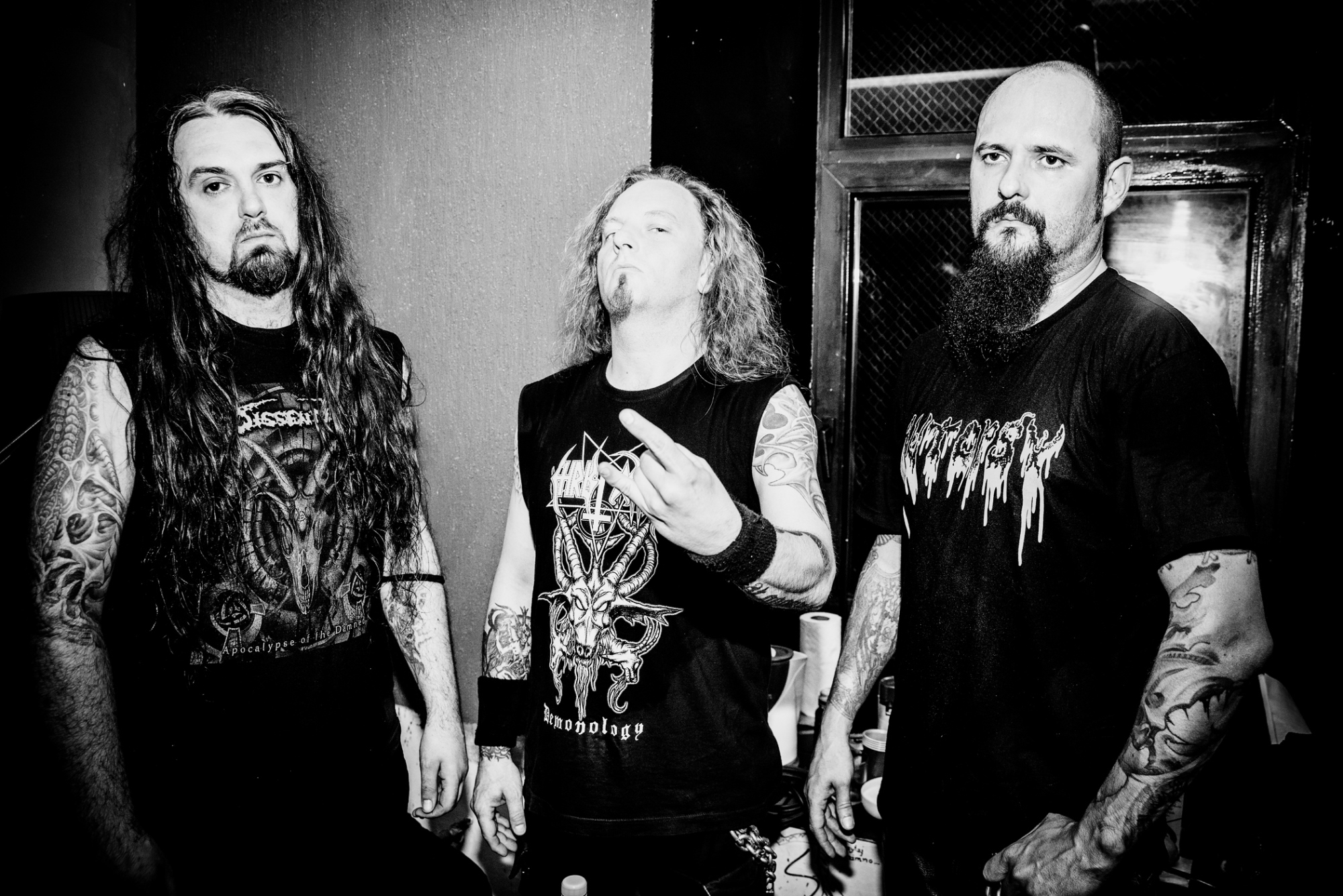