Before we started it was an idea. There are only a few bands that can swagger about solid relationship between each member of the band. Everything we do together is based on confidence in each part of Sectorial. As someone said “they are not friends of a band but a band of friends”. That`s the way it have been started…

Modern history of the band begins in 2006 with the first gig after a few years of deadlock. There was a group of classmates in that time: Igor on vocals, Yuriy on guitar, Ivan played the bass & Maxim on drums. This people have played a couple of gigs but soon Maxim decided to leave the band. It was 2007 year. To keep the progress it was decided that Igor will cope with drums. Dmitriy has joined the band in some weeks later. This line up (Ivan – vocals, Dmitriy – guitar, Yuriy – bass, Igor – drums) worked until 2010 and recorded 3 EP albums – “Cerebrum Necrosis Est It In Nobis”(2008), “Boiler”(2009), “Controlled Insane”(2009). Yuriy decided to leave at summer 2010. After couple trial bass players Boris became the new one. In this line-up the band have played a lot of gigs all over Ukraine and Russia. During summer 2011 the band has recorded 27 tracks at Blacklight Studio for new full-length album. It was released by Metal Scrap Records.

Gigs
The band has played about 100 gigs and fests with bands from Ukraine, Russia, Belarus, Poland, France, Austria and Sweden. Were touring with Infest (Fr) around Ukraine & Ass to Mouth(Pl) all over Russia and Ukraine. 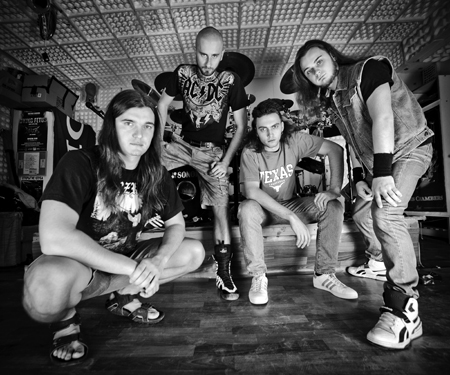